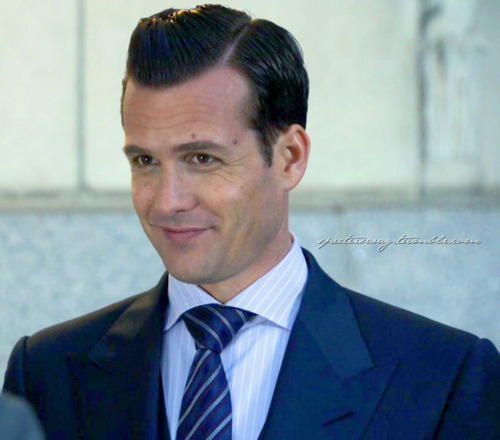 Harvey Specter is a Senior Partner at Pearson Hardman and is commonly referred to as "the best closer in New York City". Harvey takes a risk and hires Mike Ross, a veritable genius who was able to pass the bar exam despite not attending law school.

Jessica Pearson met Harvey while he was still working in the mailroom of Pearson Hardman. Harvey had realized that an associate backdated a postage when he missed a filing, so he came into Jessica's office and told her that if the firm did not declare misconduct, he would report them to the D.A. Impressed, Jessica soon paid for Harvey to go to Harvard Law, where he "jerked off the entire time he was there". He also met Dana Scott, a rival at law and occasional lover.

After graduating 5th in his class from Harvard Law, Jessica wanted him to gain "trial experience", so she recommended that he work as an assistant for New York District Attorney Cameron Dennis, saying that "Cameron was the only one he should learn from." Harvey worked as an Assistant District Attorney (ADA) under Cameron for the next 2 years. This is where he met Donna Paulsen, who became his secretary. After catching Cameron burying evidence on his cases, Harvey decided to leave the District Attorney's office to work at Pearson Hardman, with Donna following right behind him.

Entering Pearson Hardman as a "sophomore" associate, he soon went up the ranks and became a senior associate. While there, he meets Zoe Lawford, a fellow associate Harvey shared a mutual attraction with.

In 2007, Jessica approaches Harvey to find out who is embezzling money from the firm. Initially suspecting junior partner and colleague Louis Litt, they later realize that it is actually the managing partner, Daniel Hardman. Through Donna, he and Jessica find out that Daniel had been stealing from the company for his extramarital affair with Monica Eton, so they blackmail him into surrendering his seat at the firm to Jessica.

Because of his deal with Jessica, Harvey is then promoted to Junior Partner. His father, Gordon Specter, who had long been rooting for him to be promoted, dies of a heart attack. He has been visiting his grave occasionally since then, symbolically sharing drinks with him. He has also kept a record of his father, who was a saxophone player, in his office.