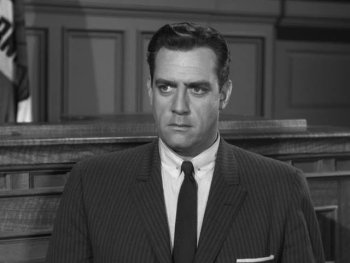 Perry Mason is a fictional character, a defense attorney who was the main character in works of detective fiction authored by Erle Stanley Gardner. Perry Mason was featured in more than 80 novels and short stories, most of which had a plot involving his client's murder trial. Typically, Mason was able to establish his client's innocence by implicating another character, who then confessed. Gardner, who was one of the best-selling authors of all time, had "135 million copies of his books in print in America alone in the year of his death" in 1969. The character of Perry Mason was portrayed each weekday on a long-running radio series, followed by well-known depictions on film and television, including "television's most successful and longest-running lawyer series" from 1957 to 1966 starring Raymond Burr; another series in 1973–1974, starring Monte Markham and Brett Somers; and 30 made-for-TV movies filmed from 1985 to 1993.

Other than what we learn of his character from the novels themselves, we know very little about Perry Mason. We are told nothing about his family, his background, his personal life or his education. In the first season of the television series, Perry helps out an old friend from World War II. He mentions that he was in a company that was at Normandy on D-Day. Mason has a professional relationship with Paul Drake, although after The Case of the Velvet Claws fees are seldom discussed. Della Street is Mason's only (unacknowledged) romantic interest. We only know that he lives in an apartment, because he is occasionally awakened from sleep to go to his office; he does not entertain anyone at home. We know his tastes in food because many scenes take place in restaurants, and that he is an excellent driver because he participates in the occasional car chase. Other than those sketchy facts, there is so little physical description of him that the reader is not even sure what he looks like. In one episode of the TV series Perry meets an old friend from his childhood, and we learn that at least part of it (the part when he knew her) was spent in Oregon. The 1930s films were not closely based on the character of Perry Mason as revealed in the books, and contain plot and character developments which are not accepted as canonical in the remainder of the books and adaptations. For instance, in one film, Perry marries his longtime secretary Della Street, while Paul Drake turns into comic sidekick Spudsy Drake.

Mason generally won his cases by getting the real culprit to confess on the stand.