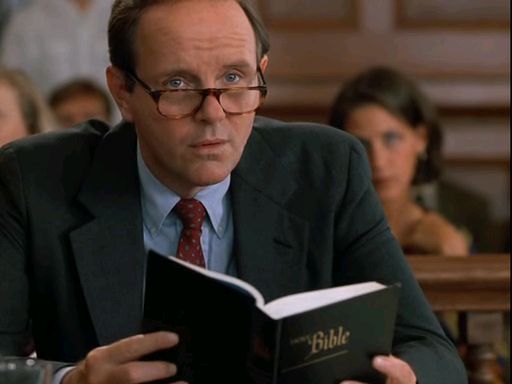 Benjamin "Ben" Stone is a fictional character portrayed by Michael Moriarty in the TV drama Law & Order. He appeared in 88 episodes.

Stone works in the Manhattan District Attorney's office under Alfred Wentworth (in the pilot episode) and Adam Schiff. It was Schiff with whom he is closest, treating him as a kind of surrogate father, his own father having been an overbearing alcoholic.[1] Stone's prosecutorial methods are portrayed as being grounded in moral principles stemming from his Catholic faith; he is shown to be pro-life[2] and opposed to the death penalty. He also is a strong advocate of social justice, having marched in the civil rights movement, although his sympathy for those at a disadvantage in society does not extend to criminals. The second season episode "Heaven" implies that Stone, like actor Moriarty, is a Dartmouth College alumnus, with references to "fraternity row" and New Hampshire.

Stone became Executive Assistant DA in 1985 after convicting con artist and murderer Philip Swann (who, in the 1993 episode "American Dream", enters a civil suit against Stone when the validity of the conviction is called into question). Stone's assistants have been Paul Robinette and Claire Kincaid.

A strict, unyielding boss, Stone can be very difficult to work with; in the pilot episode, Detectives Max Greevey and Mike Logan, intimate that Stone "eats ADAs for lunch." Nevertheless, Stone is usually rather soft-spoken; he is fond of using harmless words like "sir" to convey his contempt for the people he prosecutes.

The 1991 episode "The Troubles" establishes that Stone is a Catholic who was mostly raised by his Irish grandmother. He is divorced with one daughter, who is never seen on the show, except by way of a photograph kept on a shelf in his office. (The child in the actual photograph used on the set was Moriarty's own son, Matthew.)

Stone makes his last appearance in the show in the episode "Old Friends". The episode portrays a racketeering case in which the main witness, whose safety Stone had personally guaranteed, is murdered by the Russian Mafia. Wracked with guilt, he resigns. He is succeeded by Jack McCoy as Executive ADA.